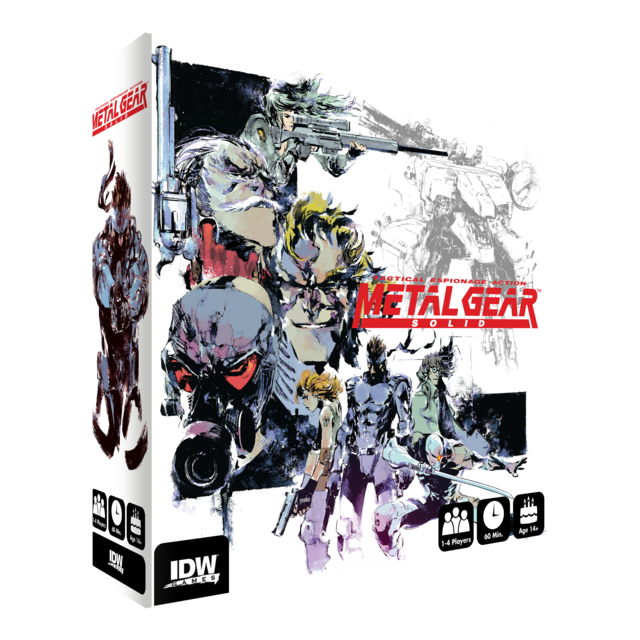 Lost Your Survey?
FAQ: Metal Gear Solid: The Board Game - Day One Edition

What happened? I thought this was an exclusive deal that had already ended!

We decided to make some changes in order to improve the game and make the best possible game for the MGS fans and players. That meant some delays that did not work out logistically with our distribution partners. The upside is that we now can open up to more pre-orders and better rates to regions outside of the USA! Get onboard now.

Can I buy the Day One Edition outside of the US?

Yes! Also, since we’re now fulfilling orders as we would fulfill a Kickstarter, we are able to avoid VAT and customs fees to most regions, as well as better shipping costs to these regions.

Will this only be available at BackerKit or will I be able to buy it in stores?

We have not made a decision about the availability of the retail version. We want to make sure that all of the Day One Edition details are squared away first.

The box looks larger? Why, and how big is it?

During play-testing we found that the spaces on the maps needed to be a bit larger for the minis to fit in them comfortably. Larger spaces = larger tiles. So we knew the box was going to grow. This allowed us more space to create a better storage solution for the game components. The box now measures 460x310x105mm (~18x12x4in).

Are missions the same as the video game or will there be new missions we have not yet seen in the game?

The narrative missions found in the storybook follow very closely to the video game. However, there were a fair amount of changes needed to be made for them to work as a board game. VR missions are totally brand new and are meant to test players’ skills.

Where is the gameplay video?

We chose to delay the release of the gameplay video. Some of the key artwork is still in the approval process. Once everything is fully approved, the video will be splattered all over the place!

Who sculpted the minis?

Who created the artwork?

Does it come with a 2000 page dialogue book to read quotes from the games as you play?

We wanted to. We really did. The boss vetoed that because of the risk of deforestation. To make up for it, we have developed over 100 pages of comic book art for the absolutely massive campaign book to truly deliver on the epic Metal Gear Solid narrative.

Is there a Snake in the Box

Yup! There’s a token for him in the standard game, but by pre-ordering the Day One Edition, you’ll get 2 box miniatures to replace those tokens!

Who designed the gameplay?

Does it have a solo play mode?

How many hours of gameplay are in the box?

Most missions, either the ones from the campaign that follow the Metal Gear solid story, or the all-new VR missions, take about 1 hour to play. Playing each mission only once offers about 25 hours of gameplay. However, since most missions are designed to be a sandbox, the replay-ability is nearly unlimited. Especially when you add in items unlocked later in the narrative to previously played, earlier missions.

My order says I won't be charged until you close the BackerKit. When will that be?

Right! You have the freedom to change or cancel your order at anytime until we close the store. We’re estimating that to be around the beginning of March 2020. At that time we’ll tell our factory to go into production and print the quantity of Day One Editions needed to meet our orders. You will receive an email notification when we are about to lock orders. At that time, you’ll have 48 hours to verify your payment method and shipping address. Then we will lock your information down.

BackerKit is a service that crowdfunded project creators use to keep track of hundreds to tens of thousands of backers—from shipping details, pledge levels, preferences and quantities, whether they have paid or had their card declined, special notes, and everything in between!

The BackerKit software and support team is independent from the campaign’s project team—BackerKit does not handle the actual reward shipping. For more information about the preparation or delivery status of your rewards, please check the project's updates page.

How does BackerKit work?

After the campaign ends, the project creator will send you an email with a unique link to your survey. You can check out a walkthrough of the process here.

I never received my invitation. How do I complete the survey?

The most common reasons for not receiving a survey email is that you may be checking an email inbox different from the email address you used to sign up with Kickstarter, Indiegogo or Tilt Pro account, or it may be caught in your spam filter.

Confirm that the email address you are searching matches the email address tied to your Kickstarter, Indiegogo, or Tilt Pro account. If that doesn’t work, then try checking your spam, junk or promotions folders. You can also search for "backerkit” in your inbox.

To resend the survey to yourself, visit the project page and input the email address associated with your Kickstarter, Indiegogo or Tilt Pro account.

How do I update my shipping address?

When will my order be shipped, charged or locked?

That is handled directly by the project creator. BackerKit functions independently of the project itself, so we do not have control of their physical shipping timeline. If you want to check on the project’s status, we recommend reading over the project's updates page.

I completed the survey, but haven't received my rewards yet. When will they arrive?

As BackerKit does not actually handle any rewards or shipping, the best way to stay updated on the shipping timeline would be to check out the project's updates page.